Landing Ships consist of six translucent pods, each of which carries an individual soldier. They cannot be damaged, and withdraw from the combat area upon releasing their passengers. Landing Ships carry both Colonists and Cosmonauts into battle. 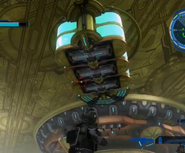