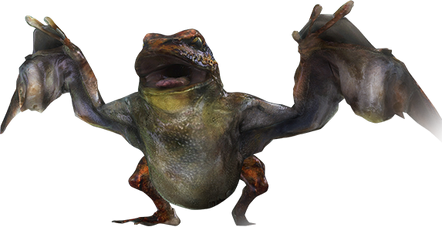 Tadpoles (タッドポウル, Taddopouru), formally known as Winged Flying Aggressors (有翼型侵略生物, Yū Yokukei Shinryaku Seibutsu, lit. Winged Aggressor), are an enemy encountered in Earth Defense Force 5. They are essentially re-textured Dragons from Earth Defense Force 2025 and 4.1, and are suggested to be the juvenile form of the frog-like Colonists, granting them their name.

Tadpoles first appear relatively late in the game, and frequently accompany Flying Aggressors into battle. They may automatically spawn into an area or be summoned by Teleport Anchors. According to dialogue, they are the juvenile form of the frog-like Colonist enemies first encountered earlier in the game. While they resemble brown frogs with wings, they are clearly based on the Dragons from Earth Defense Force 2025 and 4.1. They attack by swooping down out of the sky and grabbing enemies in their mouths, then carrying them through the air until the enemy either kills them or they simply spit them out. They also spit greenish blasts of fire from their mouths that can deal a substantial amount of damage on higher difficulties. Their bio on the game's official website stresses that they are closer to the alien enemies than the giant insects because they demonstrate intelligence, however within the game they behave just the same as the Dragons from the previous games. Much like the Dragons, Tadpoles consist of three color-coded variants.

Red Tadpoles are the most common variant, as well as the first type introduced, replacing the standard Green Dragon from 2025 and 4.1. Red Tadpoles spawn in great numbers and fly together in swarms as they gradually descend to the battlefield. They deal average damage and take an average amount of hits compared to the other variants.

The second most common variant, Green Tadpoles often appear mixed in with swarms of Red Tadpoles. They are the game's equivalent of the Yellow Dragons from 2025 and 4.1. They are smaller than Red Tadpoles and as a result are much faster. However, they possess very little health and can be brought down very quickly.

A Tadpole catches a hapless Ranger in its mouth

A Ranger fires at a swarm of Tadpoles as they dive headfirst to the ground
Community content is available under CC-BY-SA unless otherwise noted.
Advertisement