You were probably looking for Hornets

Wasps are an elite enemy that make their first and currently only appearance in Earth Defense Force Insect Armageddon.

Wasps have three attacks. They have a venom spray that is effective at range, a sting that can deal crippling damage at close range, and a bite. The fact they fly makes them an extremely dangerous enemy.

Biomechanical Wasps (also known as "Ravager Wasps" in commonality to other biomechs in IA due to an e-manual released on the official Facebook page) are similar to their organic counterparts but they fire lasers instead of an acid spray. All other attacks and behavior patterns are the same.

The Wasps can spray acid like Ants, while the mechanical wasps shoot lasers instead. They move very quickly, making them a difficult target to hit without missiles. Wasps can also land on the player, holding them down while dealing severe damage. They will continue to do this until injured by teammates or the target dies. Wasps are a very dangerous enemy and should be taken out as quickly as possible.

The Mechanical Wasp's laser beams are almost identical in appearance to the beam fired by the Gunship, but deal significantly more damage, particularly on harder difficulty levels. Mechanical Wasps should be prioritized over all other enemies in an area if possible, especially if a Nest needs to have charges planted on it in order to seal it up. 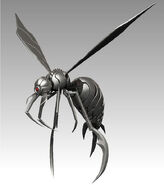 A EDF soldier in Tactical Armor retreats from a wasp and some Biomechanical Ants.

An EDF tank and a Trooper engage a few Wasps (Stage 1).
Community content is available under CC-BY-SA unless otherwise noted.
Advertisement